Our cold atomic gases research team, N. Šantić, D. Buhin, D. Kovačić, I. Krešić, D. Aumiler and T. Ban published their work in Scientific Reports where the cooling of the rubidium atoms has been studied by an unconventional method based on the use of femtosecond laser, which in the frequency domain acts as an optical frequency comb. This method could enable cooling of atoms with strong transitions in UV spectrum range which cannot be cooled by laser due to shortage of continuous-wave laser light sources in this spectral range.

Proposed method based on the optical frequency comb (FC) could enable cooling of atoms with strong transitions in UV spectral range.  This group of elements includes hydrogen, antihydrogen, deuterium and some atoms important for study of biological systems, like oxygen and carbon. Cooling of hydrogen, antihydrogen and deuterium would enable more precise measurements of basic physical constants, more accurate optical clocks, rigorous tests of CPT symmetry and creation of quantum degeneration of new types of atoms. Cooling of atoms important for biological systems would enable better understanding of chemical processes on molecular level.

The cooling of rubidium atoms by FC has been accomplished in conditions in which the frequency of one mode of FC has been red-detuned from the frequency of 5 2S1/2 (F=2) → 5 2P3/2 (F`=3) transition within the 87Rb atom. Cold rubidium atoms have been created in magneto-optical trap using the usual method based on continuum (CW) lasers. Upon reaching a certain temperature, CW lasers have been turned off, and the atoms have been illuminated by the light of the frequency comb in 1D counter-propagating geometry. The lowest measured temperature is close to the Doppler temperature for rubidium atoms (146 mK) and is limited by small power in one FC mode. Analogy between cooling by one FC mode and CW laser has been shown, which has confirmed that the other FC modes do not affect neither the additional cooling nor heating of atoms. This has opened the way for cooling atoms which require light in UV/VUV spectrum range and for their application in quantum optics experiments.

The research has been financed from the project IP-2014-09-7342, Optomechanics caused by frequency comb, financed by the Croatian Science Foundation. 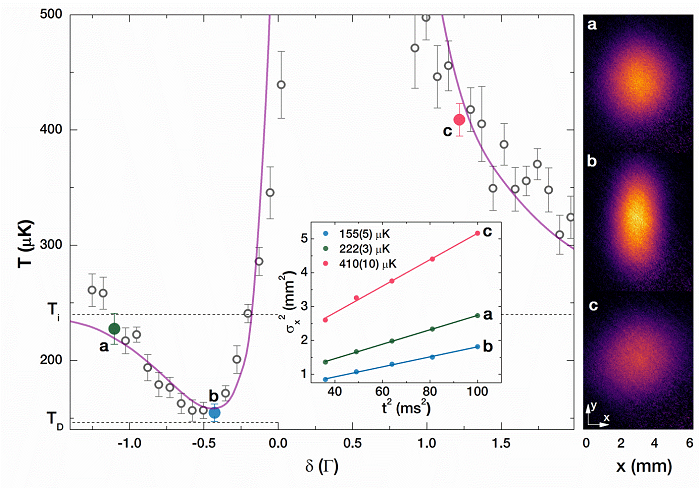 The figure depicts the temperature of the rubidium atom as a function of the displacement of the nth mode of the frequency comb from 5 2S1/2 (F=2) → 5 2P3/2 (F`=3) transition in 87Rb atom (left). Temperature has been measured by using the time-of-flight technique (TOF), based on the free expansion of the atom cloud, after no force is acting upon the atom, i.e. after all the lasers are turned off. For different expansion times, the image of the distribution of atoms in cloud is recorded, and the temperature is obtained from the dependence of the square of expansion distribution on the square of expansion time (inset to diagram in the left side of figure). The cooling has been detected when the nth mode of FC is red-detuned from the atomic transition with the lowest temperature of 155(5) µK. In the case when the nth mode of FC is blue-detuned from the transition, heating of the atom has been detected. Ti stands for the initial and TD for Doppler temperature. On the right side of the figure the images of the cloud obtained after 6 ms of expansion for cases of displacement of the nth mode of FC corresponding to  a, b and c on the left side of figure are shown. The violet curve is the result of the theoretical model.