Marin Petrović, research associate at the Institute of Physics, in collaboration with colleagues from the University of Duisburg-Essen, came to new findings important for understanding of synthesis of single-layer hexagonal boron nitride. Research results of this atomically-thin, insulating material have been published in Scientific Reports, where it is shown how the morphology of the substrate which is used in the synthesis determines the shape of the growing domains of the hexagonal boron nitride.

Synthesis of large, high-quality monolayers of hexagonal boron nitride (hBN) is necessary for advancements in scientific investigation and technological exploitation of this atomically thin material. Most commonly, hBN is synthesized on various metal substrates via chemical vapor deposition (CVD) process. In one such process, precursor molecules are delivered onto a hot metal surface, where their decomposition and self-assembly into hBN mesh take place. CVD growth inevitably consists of initial nucleation of small hBN islands, i.e., domains which grow bigger, and eventually coalesce in order to form full monolayers. The quality of synthesized hBN largely depends on the structure of domain boundaries, which in turn depend on the shape of the initial hBN islands.

In this work, the authors synthesize hBN on Ir(111) surface and investigate the emerging islands by means of low-energy electron microscopy (LEEM) and atomic force microscopy (AFM). Two types of island shapes are found: triangular and trapezoidal. While triangular shape is easily understood to arise from energetically preferable B-termination of hBN islands, the origin of the trapezoidal shape was not previously understood. The data presented in the article clearly demonstrates that the edges of hBN, during the course of the synthesis, strongly interact with the mono-atomic steps of the Ir surface, leading to repositioning of the steps (see Figure 1). 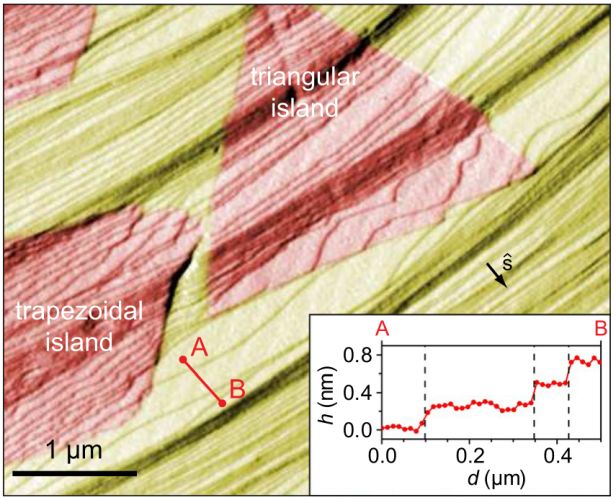 Moreover, real-time LEEM imaging during the synthesis revealed that hBN edges parallel to the Ir steps advance relatively slowly [see Figure 2(a)]. This means that hBN edges parallel to the Ir steps are more strongly bound to the substrate, i.e., they have lower energy in comparison to other hBN edges. Depending on the local orientation of the Ir steps, such lowering of energy can make initially unfavorable N-terminated hBN edges energetically preferred, as proven by considering the Wulff construction of the system [see Figure 2(b)]. This explains the emergence of trapezoidal islands which, due to the symmetry of hBN, must contain both B- and N-terminated edges.

Figure 2. (a) Stacked contours of growing hBN islands extracted from LEEM data. (b) Wulff construction of an hBN island on the Ir surface for different orientations of monoatomic steps.