Our colleague Silvia Tomić in collaboration with Martin Dressel from the Universitaet Stuttgart has published the review article entitled” Molecular quantum materials: electronic phases and charge dynamics in two-dimensional organic solids” in prestigious journal Advances in Physics. In this original review the authors provide a perspective on recent developments and their implications for understanding of novel quantum phenomena in the physics of two-dimensional organic solids. These materials represent a fascinating class of strongly correlated electron systems and are recognized as versatile quantum materials.  They host a broad range of quantum phenomena, which stay at the center stage of condensed-matter physics today. The review covers various aspects of electronic ferroelectricity, massless Dirac fermions, quantum criticality, correlation-driven metal-insulator phase transition, quantum liquid states of spin and electric dipoles. Representative experimental results are complemented by current theoretical approaches.

Physics in smaller number of dimensions reveals a qualitative change in the system’s properties. Despite not being atomically thin as graphene, low-dimensional organic materials have many characteristics linked to their reduced dimensionality. It is associated with the anisotropic overlap of molecular orbitals due to delocalized π-electrons distributed over the extended organic molecule. If the almost planar molecules are assembled face-to-face in certain patterns constituting bulk crystals, the orbitals of adjacent molecules overlap slightly, forming narrow electronic bands. Although the unit cell of molecular crystals contains many atoms, it consists of a small number of molecules. In most cases, only one electronic band cuts the Fermi energy, leading to rather simple Fermi surfaces. Therefore, the effective Coulomb interaction between electrons is poorly screened by other bands. These two factors (small bandwidth and ineffective screening) make the molecular conductors strongly correlated electron systems.

Electronic ferroelectricity driven by a charge-order phase transition is predominantly established in weakly dimerized solids with quarter-filled bands. Here, the combined action of the on-site Coulomb repulsion U and a sizeable inter-site Coulomb repulsion V leads to the formation of a charge-ordered ground state. The most prominent example is α-(BEDT-TTF)2I3, for which charge-order-driven ferroelectricity is demonstrated unambiguously in numerous experiments including optical and THz-wave second-harmonic generation, X-ray scattering, Raman and infrared vibrational spectroscopy, electron-spin and nuclear magnetic resonance and polarization switching.  The dynamic response of ferroelectric domains has been extensively studied by dielectric spectroscopy, time and field-dependent transport measurements and time-resolved measurements of electrical conductivity and femtosecond pump-probe spectroscopy.

Crystal structure of the charge-ordered ferroelectric α-(BEDT-TTF)2I3. (a) The BEDT-TTF molecules are arranged in the ab-layers. Sheets of I3 -anions separate these layers in c-direction. (b) View along the molecular axis reveals molecules organized on a two-dimensional triangular lattice. (c) Axonometric view of α-(BEDT-TTF)2I3 with the unit cell indicated in green.

On the other hand, materials with half-filled bands in which pairs of molecules (s.c. dimers) are organized on a two-dimensional triangular lattice are mainly governed by the on-site Coulomb repulsion U and there the Mott physics plays important role. In some of them, despite the relatively large exchange coupling there is no magnetic ordering: they are considered as candidates for the realization of a quantum-spin-liquid state. The prominent example of a quantum liquid consisting of both electric and magnetic dipoles is the hydrogen-bonded single-molecular Mott insulator κ-H3(Cat-EDT-TTF)2. On the other hand, the concurrent occurrence of quantum spin liquid and paraelectric phases is missing in BEDT-TTF based spin liquids: there only an anomalous dielectric peak shows up due to an inherent disorder. The theoretically developed randomness-induced quantum spin-liquid models show disorder enhance cooperative action of quantum fluctuations and triangular frustration. It remains a challenging task to verify the extent and influence of disorder and inhomogeneity and whether they are important for the formation of the quantum-spin-liquid state in organics. 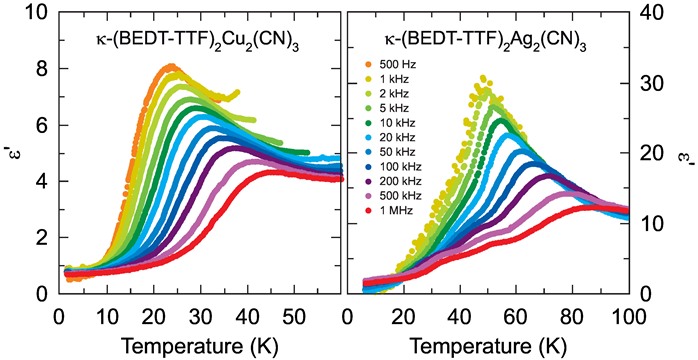 Temperature dependence of the real part of dielectric function ε of quantum spin liquidsκ-(BEDT-TTF)2Cu2(CN)3 and κ-(BEDT-TTF)2Ag2(CN)3.