Our colleagues Dino Novko, Vito Despoja, and Branko Gumhalter, in collaboration with the scientists from the University of Pittsburgh and Georg-August-Universität Göttingen, have published a paper as Editors’ Suggestion in Physical Review B. The authors present a rigorous theory to explain a novel plasmonic photoemission feature in silver.

Photoemission spectroscopy is an experimental method based on photoelectric effect. Its first quantum mechanical one-electron description was given by Einstein: absorption of a photon (quantum of applied radiation) by an electron excites it from the initial level to another level with energy higher by the photon energy. This linear relationship (scaling) between the energies of absorbed photons and photoemitted electrons has been used to interpret innumerous investigations  of the electronic structure of matter.

In many-electron systems like metals the electron interactions with quantized oscillations of electronic density (weakly dispersive plasmons) are strong. Here the primary electron photoexcitation may be accompanied by secondary processes involving plasmons so that the final photoelectron spectrum may encompass inelastic contributions disobeying Einstein’s scaling in photoelectron spectra.  In our recent studies of two-photon photoemission from silver we have discovered that the energies of certain spectral lines do not scale with the applied photon energy but rather stay pinned at multiples of plasmon energy above the Fermi level. This effect of monochromatized electron emission in optical energy conversion is highly nontrivial and here we interpret it in terms of plasmonically assisted channels of photoemission. The presented theory is based on a scenario in which real plasmons excited in secondary processes act as excitation field for emitting electrons from the Fermi level at multiples of plasmon energy.  Results of our calculations combining this scenario and silver electronic structure are in accord with experiments. This introduces new paradigm of “non-Einsteinian” plasmonically assisted channels of photoemission for interpretation of peculiarities in linear and nonlinear photoemission spectra of silver. 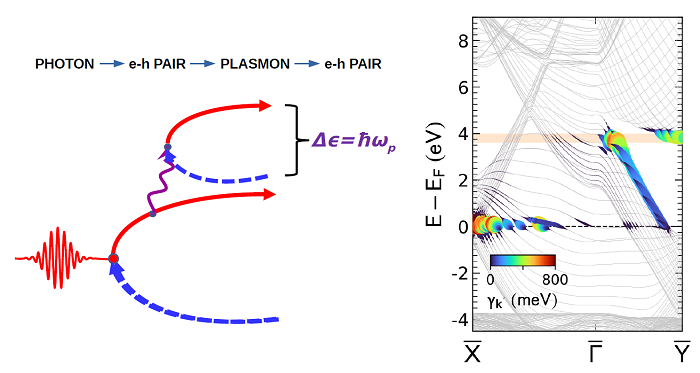 Since our measurements and concomitant theoretical interpretations of “non-Einsteinian” photoemission have been restricted to silver, a question arises if this is a specificity of the investigated system or a more general phenomenon.   This provides stimulus for future research.