Our colleague Dino Novko, in collaboration with scientists from Humboldt-University in Germany and Istituto di Struttura della Materia in Italy, has published a paper in prestigious journal Physical Review Letters. The authors investigate the unique hot phonon dynamics of E2g mode in MgB2 by using first-principle quantum-field theoretical approach.

In recent years, time-resolved pump-probe experiments have provided a powerful tool to investigate the emergence of many-body processes in systems driven out of equilibrium, a spectrum of phenomena that was not accessible by steady probes. Generating hot-phonons, the concept widely explored in graphene and two-dimensional semiconductors, opens a way to engineer the energy transfer between different degrees of freedom and to selectively tune the optical features associated with the phonon resonance.

An intermetallic binary compound MgB2 was discovered to exhibit superconductivity around 40 K. Despite its simple structure and relatively low superconducting transition temperature compared with cuprates, it displays many peculiar characteristics. Most remarkably, the anisotropic electronic structure results in two superconducting gaps arising from the different (anisotropic) electron-phonon coupling strengths. Since the electron-phonon coupling is strongly concentrated in few in-plane E2g phonon modes, the long-wavelength E2g mode has been extensively investigated by using both experimental and theoretical approaches. Experimentally, a hot phonon dynamics of E2g mode has been suggested to play a critical role in MgB2. However, the actual observation of hot-phonon physics in MgB2 was quite indirect, and further compelling evidence is needed.

Using ab-initio and quantum-field-theory techniques, this study demonstrates the peculiar anisotropy of the electron-phonon interaction in MgB2 that provides a new path for the excitations of hot E2g phonons. The latter phonon path plays a crucial role in this material, controlling the scattering mechanisms in the normal state as well the superconducting pairing. The time-resolved dynamics of electronic and vibrational degrees of freedom are fully explained by this study, and the spectral signatures of the hot-phonon physics in the time-resolved Raman spectroscopy is predicted. On the theoretical side, such study allows to reveal fundamental nonadiabatic effects of the E2g mode, which were previously suggested to be crucial in this compound. The present theory offers the time-resolved microscopic insights into the energy flow pathways between electron and lattice subsystems in materials with strong and unusual electron-phonon coupling. 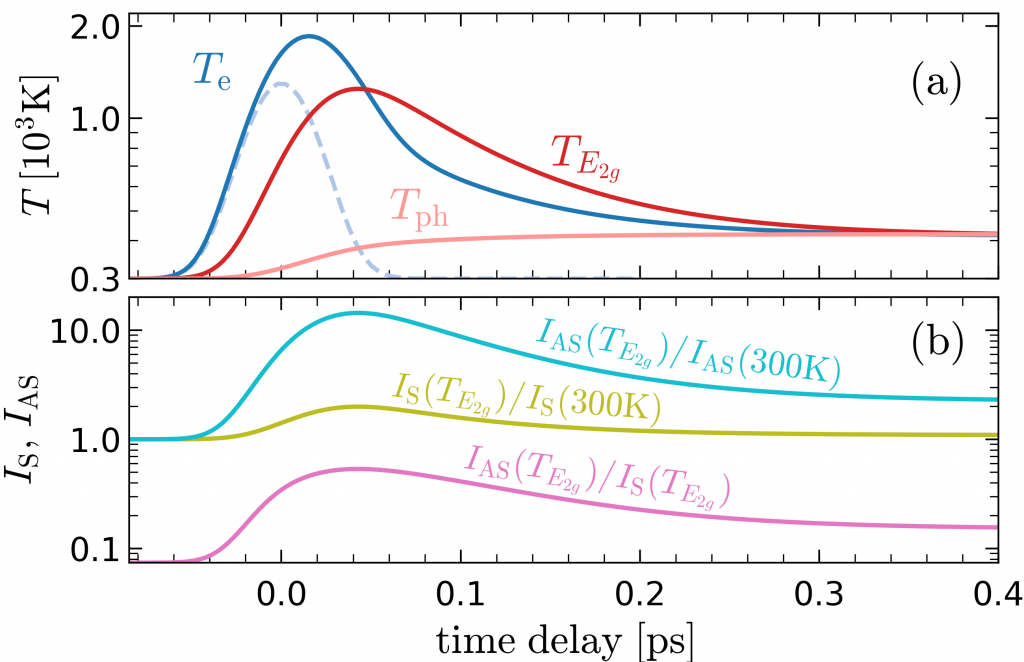 Fig. 1 (a) Time dependence of the electron and phonon effective temperatures Te, TE2g, Tph in MgB2 as obtained from the three-temperature model. The dashed line shows the pulse profile. The absorbed fluence of the pump pulse is 12 J/m2, the pulse duration is 45 fs. (b) Ratios between the intensities of the Stokes (IS) and anti-Stokes (IAS) E2g Raman peaks. 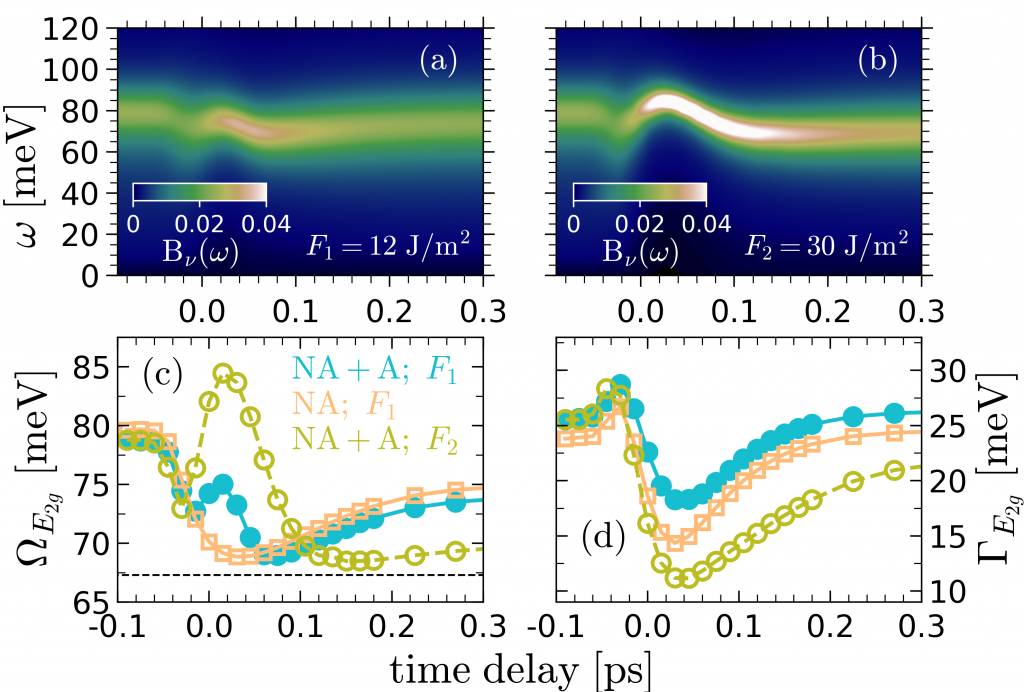