Our colleagues Dino Novko and Branko Gumhalter, in collaboration with the scientists from the University of Pittsburgh and Georg-August-Universität Göttingen, have published a paper in the prestigious journal ACS Photonics. The authors investigate a peculiar non-Einsteinian plasmonic photoemission from silver surfaces.

Optical fields interacting with solids excite single particle quantum transitions and elicit collective screening responses that define their penetration, absorption, and reflection. The interplay of these interactions on the attosecond time scale defines how optical energy transforms to electronic, setting the limits of efficiency for processes such as solar energy harvesting or photocatalysis. Our understanding of light−matter interactions is primarily based on specifying the electronic structure of solids and initial particles or fields occupying well-defined states, and the outcome of their interaction culminating in photoelectron or photon emission and analysis, with scant ability to follow the transitional, ultrafast many-body interactions that define it. The optical properties of metals transubstantiate from metallic to dielectric when the real part of their dielectric response function, Re[ε(ω)], passes through zero. At low frequencies Re[ε(ω)] < 0 and the collective free electron plasmonic response confers high reflectivity. At high frequencies Re[ε(ω)] > 0 and the fields penetrate the dielectric giving rise to charge-density waves including longitudinal plasmons. How such collective plasmonic responses decay on the femtosecond time scale into single particle excitations is cardinal to plasmonics, but not sufficiently well described by experiment or theory. We examine the spectroscopic signatures of the nonlinear single particle and collective excitations of the low index crystals of silver by nonlinear two-photon photoemission spectroscopy, at frequencies where the bulk dielectric response passes through zero. We find that the transition through zero dielectric region is reflected in the nonlinear photoemission spectra, and in particular, the bulk plasmons decay by giving rise to a non-Einsteinian plasmonic photoemission component. This response, where the energy of photoelectrons is not defined by the incoming photons, occurs when photons excite the longitudinal plasmons, which then decay by exciting photoelectrons selectively from the Fermi level. Such mode of plasmon decay into hot electrons is contrary to the general agreement, but confirms a theoretical prediction by J. J. Hopfield from 1965. Our experiment illuminates a more energy efficient optical-to-electronic energy flow in metals that so far has escaped scrutiny. 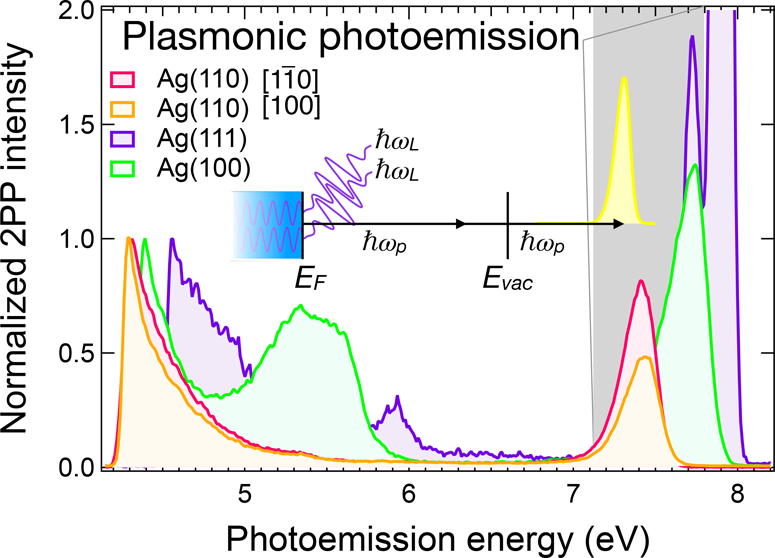 Fig. 1 Summary of plasmonic photoemission from low index surfaces of silver induced in two-photon photoemission (2PP) with photon energy ħωL in the ENZ region. The spectra are normalized at the work function edge. The photon energy ħωL and polarization that excites the most intense 2ħωP peak is selected for each surface. The gray shading highlights the collective plasmonic photoemission signal from the Fermi level. Other peaks can be assigned to single particle Shockley surface (SS) resonance, image potential IP ← SS transition, and the bulk Usp ← Lsp two-photon transition (sp).