Our colleague Ivan Balog and his collaborators from Université de Lyon in France have published a paper in prestigious journal Physical Review Letters. Their work demonstrates a new theoretical approach to describe the disorder-driven quantum phase transition in Weyl semimetals.

Whereas our understanding of solids is based on a description as a perfectly regular lattice of atoms, real materials are far from this ideal view. Lattice defects and impurities are unavoidable. The disorder can obscure properties of ideal solids, or even lead to remarkable new quantum phenomena such as the Anderson localization. A standard description of the consequences of a presence of the disorder relies on a statistical framework through using a distribution function of the disorder, e.g. position encoding of impurities. In most instances, the law of large numbers allows to use a Gaussian distribution to model the disorder. However, non-Gaussian rare fluctuations of the disorder lead to crucial experimental consequences in a few cases, similar to those encountered when describing the depinning of an interface. The quantitative description of such cases has been challenging for a theoretical modeling. The present work demonstrates that the non-Gaussian disorder fluctuations are central issues in the physics of relativistic semimetals known as Weyl materials. In recent years, the discovery of materials in which the dynamics of electrons is governed by relativistic equations of motion has raised the question of the possible anomalous properties of such relativistic charge carriers. Among these properties, the effect of disorder has proved to be highly unusual, leading to a phase transition controlled by the amount of disorder. The study of the scale dependence of the whole disorder distribution function has shown that the transition was indeed controlled by the non-Gaussian disorder fluctuations. Furthermore, the scale dependence of this distribution was unexpectedly related to the differential equation describing the flow of fluids through a porous medium. The work brings a new perspective to the disorder-driven quantum phase transition and shows a potential applicability of the method to other quantum systems. 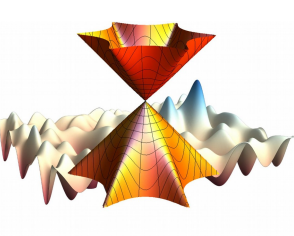 Schematic illustration of the electronic structure of Weyl semimetal together with an image of disorder potential.