Our colleagues Dino Novko, Marin Petrović, and Marko Kralj, in collaboration with colleagues from Japan (Kyoto University, Toyota Physical and Chemical Research Institute, Open University of Japan), published a paper in the journal ACS Photonics on ultrafast time dynamics of multipole plasmon in heterostructures based on 2D materials.

Our colleagues Marin Petrović and Marko Kralj had investigated a change of optical reflectivity in a special architecture of alkali metal bilayers, and their work was published in 2020 in the journal of Physical Review Letters (http://www.ifs.hr/news/science-news/markoprl2020/). In the special architecture, the previously synthesized epitaxial 2D material was sandwiched between alkali metal layers formed by intercalation and adsorption of alkali atoms. In such systems, a strong absorption band was observed in the visible part of the spectrum originating from the multipole plasmon and its direct binding to external electromagnetic excitation. 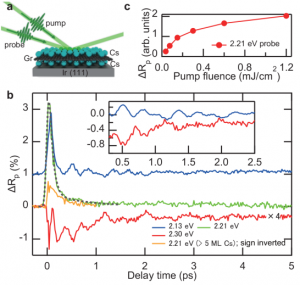 Figure 1. (a) Schematic view of the sample and pump-probe experiment. (b) Time-resolved reflectivity change curves of Cs/Gr/Cs/Ir(111) of several indicated pulse energies. The inset is an enlarged curves that shows the oscillation of the spectrum is in the opposite phase depending on the energy of the probe pulse. (c) Nonlinear dependence of reflectivity amplitude on the probe pulse strength.

In this latest study, expanding collaboration with colleagues from Japan (Kyoto University, Toyota Physical and Chemical Research Institute, Open University of Japan), the time dynamics of this system was investigated. It has been shown that after resonant optical excitation, a transient relaxation of the excited plasmon in the reflectivity spectra occurs in just a few tens of femtoseconds (20-70 fs), cf. Fig. 1. Such behavior is attributed to the localization of a multipole plasmon predominantly within the outer alkali atom layer. For the same reason, strong nonlinearity of the excited system was observed in pump-probe experiments. In addition, the localized excitation non-thermally activates the coherent surface phonons of the system, which is further manifested in the modulation of plasmon relaxation in the THz frequency range (Fig. 2). 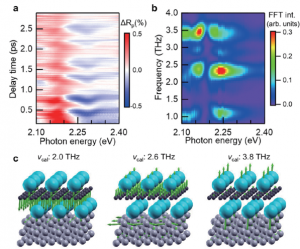 Figure 2. (a) 2D plot of reflectivity signals in the pump-probe experiment for Cs / Gr / Cs / Ir (111). A section for pulse delays greater than 0.2 ps is shown to emphasize signal oscillations due to coherent phonons. (b) 2D plot of Fourier transformed spectra from (a). (c) Three corresponding phonon modes in the THz frequency range obtained by density functional theory calculation.

These new discoveries show that a multilayer architecture in which 2D materials enable sharp separation, i.e. quantum localization of plasmons within an atomically thin layer, leads to new effects of importance for surface plasmon-polariton systems. New features such as ultra-fast optical response are important for applications in photonics, optoelectronics, and photocatalysis.