Our colleague Eduard Tutiš, in collaboration with scientists from École Polytechnique Fédérale de Lausanne (EPFL), University of Fribourg, Max Planck Institute for Chemical Physics of Solids and Department of Physics of PMF in Zagreb, earlier this month published a paper in npj 2D materials and Applications. The paper provides the first experimental and theoretical insight into the state with electronic orbitals getting self-organized into metallic objects (the “Chains of Stars”) extending in direction perpendicular to layers.

Their paper addresses the layered crystal 1T-TaS2 — a compound with the richest phase diagram among transition metal dichalcogenides (TMDs). The electric conductivity in such materials is usually orders of magnitudes bigger within layers than in direction perpendicular to them. The opposite is found in the paper which provides the first experimental and theoretical insight into the state with electronic orbitals getting self-organized into metallic objects (the “Chains of Stars”) extending in direction perpendicular to layers. The “Chains of Stars” remain weakly interconnected, resulting in the state with metallic conductivity in direction perpendicular to layers and non-metallic conductivity within layers. This “inverted” electric anisotropy behaviour is unpresented in layered crystals.

The paper changes the ruling paradigms of charge-density-wave (CDW) and insulating phases in 1T-TaS2, including the widely researched Mott phase, and the unique superconducting state in mosaic CDW phase of 1T-TaS2. The very compound has been recently exposed as the one where the electronic states can be locally and rapidly changed by variety of means (e.g. using light or electric pulses), promising of novel ways to create and manipulate electronic devices at nanoscale.  The present insight offers further possibilities in that direction. 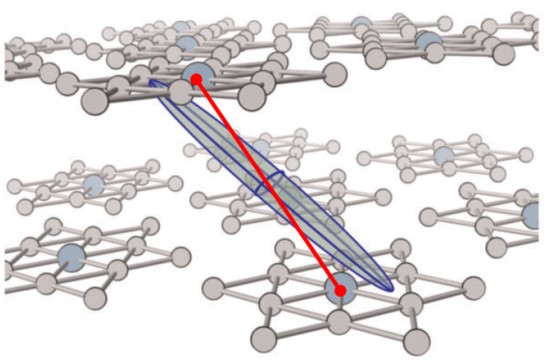 The segment in the “chain of stars” connecting two subsequent layers in 1T-TaS2 (red line). The conductivity ellipsoid calculated for a given situation is also shown in the space between layers.